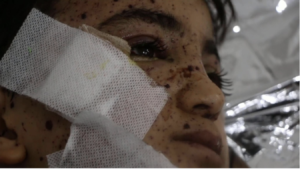 Happy Valentine’s Day from Syrian & Russian bombers: this little guy named Wajih Al Asali was pummeled with concrete rubble while at a car repair shop in Idlib with his brother & dad. He’s now swathed in bandages & struggling to breath. He & his 11-year-old brother ‘hope Allah kills Assad & Russia’. Seven-year-old Rinad Zaidan was playing with her younger brother when the bombs hit. The White Helmets pulled them from the rubble & then pulled shrapnel from their heads, necks, & faces. She wants to be a doctor when she grows up so she can treat children. They were the lucky ones. Four-month-old Ghofran froze to death in an IDP camp. Ghofran means ‘forgiveness’ but let’s get real: there can be no forgiveness for the slaughter & the displacement of over a million people or for endangering the lives of 1.5 million children in Idlib.

Meanwhile the Assadist & Stalinist cult, also called the confederation of fools, which usurped the antiwar movement will be meeting in NYC to map out a defense of Iran against the US. They have their hand on Assad’s pulse & their nose up Iran’s ass. Meanwhile Idlib burns & they remain not just silent but absolutely complicit with the carnage inflicted on civilians & the Syrian Arab Spring by Syria, Russia, & Iran.