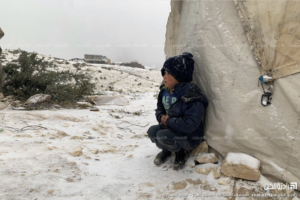 Assad propagandists & their flunkeys are posting triumphal photos of Syrian troops holding up the Assad dynasty’s flag as they take over more areas. They are ignoring apocalyptic images from Assad’s scorched earth slaughter & destruction in Idlib & Aleppo, now the front lines of the counterrevolution against the Arab Spring. They are also ignoring videos of Syrian troops marauding & desecrating civilian graveyards.

There are estimates that nearly 750,000 civilians are fleeing for their lives, leaving ghost towns & bombing rubble. Hundreds have been killed in Syrian & Russian bombing & ground assaults. Tens of thousands of displaced civilians are freezing in below zero temperatures. Tens of thousands remain in Assad’s gulag where torture & hanging are routine. Half of Syria’s population has been displaced, either living in exile or in squalid refugee camps within Syria subject to regime bombing. Assadists & Stalinists call this ‘liberation’? The most corrupt & deranged ones call this ‘self-determination for the Assad dictatorship’.

The Syrian counterrevolution will be remembered for its fascist & Stalinist propagandists, modeled on Goebbels, who promote militarism as justification for slaughter & a counterforce to revolution. There will be an accounting, even if the Syrian Arab Spring is defeated by the combined militarism of Syria, Russia, Iran, Hezbollah, & the US-coalition. That accounting will be led by Syrian refugees who were partisans of the Arab Spring & who are not remaining silent & by the emergence of the Iraqi Arab Spring which will help set the record straight. Military force against a popular democratic uprising is counterrevolution, not a ‘liberation’.

The Syrian Arab Spring has not been decisively defeated. Its political spirit will never be defeated. Part of their struggle is getting antiwar & human rights activists around the world to understand the truth of the Arab Spring–as the Sudanese & Iraqi protesters do–& reject militarism as an ’emancipatory’ force against democracy.

This photo is a small child in an IDP camp living in flimsy tents in freezing weather. The photo is dated today.