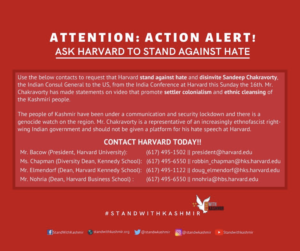 Harvard University is sponsoring an India Conference on February 15th & 16th. It is almost certainly part of an Indian government propaganda campaign to counter criticism & legitimize the occupation of Kashmir & persecution of Indian Muslims. The featured speaker is Sandeep Chakravorty, the Consul General of India in New York who called for ethnic cleansing in Kashmir.

Stand With Kashmir is on a campaign to pressure Harvard to disinvite Chakravorty in the same way they would, or at least should, disinvite an avowed Nazi. They have listed here the phone numbers & email addresses of Harvard officials & are asking us to contact & pressure them to cancel Chakravorty & in fact this entire propaganda event.