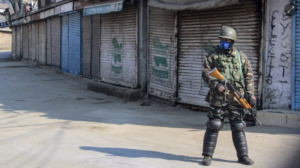 Today, India took its third delegation of foreign diplomats on a tour of Kashmir. The first one, comprised of extremist rightwing freeloaders from Europe, bombed from ridicule & the second one became a non-event. There’s a pattern to these tours: they drive from the airport in high-security motorcades, stay at luxury hotels with high-security protection, take a boat ride on Dal Lake, & then eat lavish meals in regal dining halls. Of the fifty or so diplomats on the first two propaganda tours, none has reported anything about the overwhelming presence of Indian troops & everyone knows they’re flunkeys for the Modi regime getting a free holiday. Just like corrupt US politicians who go on golf & booze tours at the expense of corporations.

The twenty diplomats on this tour are from Germany, Canada, Bulgaria, Nigeria, France, New Zealand, Mexico, Italy, Afghanistan, Austria, Uzbekistan, Poland, & the European Parliament. The diplomat from Afghanistan already made a fool of himself by telling reporters “Everything is normal & alright here. We saw children on the way to their school, which is a sign of normalcy.” But all schools, including colleges, have been closed for winter vacation since December. His idiotic blunder is being ridiculed in all media reports, including the NY Times. You tour a flunkey, you get such blunders. Modi might suggest the other diplomats keep their traps shut.

Reports also cite Abrar Ahmad, a Kashmiri student who said “such delegations must come out of the high-security zones to know what Kashmiris are facing & what they want.” That’s not what they’re there for. Modi’s foreign minister reported that the delegation would meet with young people from ‘different ethnic & religious communities, local business & political leaders, civil administration & representatives of mainstream media’. Do they all live in the high-security zones? Or does Modi bus them in to do a song & dance for India?