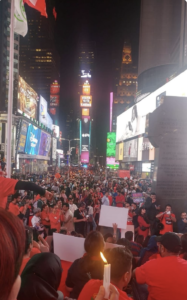 Just in case Kashmiris who were under lockdown do not yet know, an international solidarity movement with Kashmiris emerged in response to the lockdown. There were hundreds of protests all over the world including tens of thousands of people. When Modi was being lionized by Trump in Houston & by world leaders (including Jacinda ‘Crocodile Tears’ Ardern) at the UN in NYC, there were thousands of protesters standing for hours chanting ‘azaadi’ in solidarity with Kashmiris. Thousands marched in NYC at several rallies with banners from Palestinian, Uyghur, Rohingya, Syrian, Jewish, human rights, women’s rights, civil rights groups. This photo is from September 26th when thousands wearing red for solidarity with Kashmir filled Times Square in NYC chanting ‘azaadi’ under these billboards proclaiming ‘Free Kashmir’, ‘Stand with Kashmir’, ‘Restore human rights’.

A Kashmiri solidarity movement emerged whilst India was trying to silence Kashmiri voices. It was led brilliantly by Kashmiris in diaspora who spoke, testified, organized, marched & made the issue of Kashmiri self-determination a central issue in international politics. There were calls for a BDS-like boycott of India to stand in solidarity with Kashmir. A new day has dawned for the Kashmiri freedom struggle, an international solidarity has emerged & instead of silencing Kashmiri voices, they have been amplified a hundredfold.