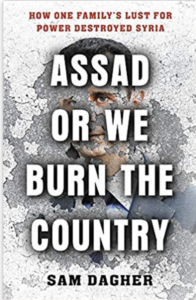 “Assad or We Burn the Country” by journalist Sam Dagher is one of the most comprehensive books written about the Syrian Arab Spring & the counterrevolution against it. Dagher begins with Hafez Al-Assad’s rise to power in 1963 & consolidation of a police state. His psychological profile of Bashar Al-Assad, including the arranged marriage to Asma, is relevant mostly because it shows how the regime uses their westernized personas to support Islamophobic ‘war on terror’ propaganda.

One of the strengths of the book is Dagher’s discussion of the role of Iran & Hezbollah in the counterrevolution. His focus is on the power politics involved so he isn’t as cogent in discussing the causes & rise of the Arab Spring though his descriptions of police state terrorism employed by the regime under both Assads is overwhelming. For a closer look at the emergence & character of the Arab Spring, it is necessary to read “Burning Country: Syrians in Revolution & War” by Leila Al-Shami & Robin Yassin-Kassab.

What’s important about understanding the role of Iran & its proxy Hezbollah in Syria is that it discredits an ‘orientalist’ attitude toward Middle East regimes & acknowledges their agency in counterrevolution within their own countries & in other Middle Eastern countries. Rohini Hensman’s book “Indefensible: Democracy, Counterrevolution, & the Rhetoric of Anti-Imperialism” has a very cogent analysis of the role of Russia, Iran & Hezbollah but her book is deeply problematic because of her peculiar understanding of the relationship of militarism to capitalism & her belief that the US-coalition can employ a humanitarian militarism to support the Arab Spring. In that regard, Hensman, Dagher, Al-Shami, & Yassin-Kassab all fail to see that behind the seemingly contradictory role of the US-coalition is collaboration with the regime, Russia, Iran, & Hezbollah in crushing the Arab Spring.

Dagher has a coherent description of how the Arab Spring became militarized in defense against regime massacres & slaughter but also because of meddling & intervention by Qatar & Saudi Arabia. He doesn’t elaborate sufficiently how Qatar & Saudi intervention along with regime machinations introduced ‘Islamist’ (for want of a less loaded term) elements into the counterrevolution, including al-Qaeda & ISIS, & even into defense of the Arab Spring uprising. Al-Shami, Yassin-Kassab, & Hensman address the militarization primarily as a matter of self-defense but it is important to understand how Qatar & the Saudis compromised the Arab Spring by their intervention, leading to the ‘head-choppers’ narrative employed by Assadists & Stalinists.

If one wants to understand the counterrevolution in Syria, “Assad or We Burn the Country” is a brilliant & comprehensive place to start.