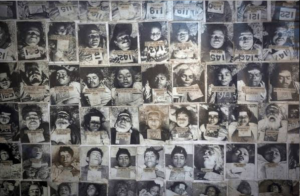 Facebook wants to cover this photo of those killed in the December 3rd, 1984 pesticide explosion in Bhopal, India. (I originally posted it on December 4th, 2014.) The explosion of 45 tons of toxic gas was caused by Union Carbide (now Dow Chemical) shortcutting safety procedures. It caused the immediate deaths of over 15,000 people & now a third & fourth generation of children suffering disfigurement, disabilities, & neurological disorders.

There has been no justice through either the Indian or US courts for the victims of Bhopal although activists have left no stone unturned & are undaunted in seeking it. They can put a cover on this photo but we will not help them hide the truth. Our fullest solidarity with the people of Bhopal in taking on one of the multinational corporations that are killing our children & destroying our planet out of unbridled greed.