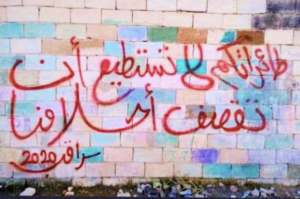 This graffiti on a wall in Saraqib, Idlib being bombed by Syrian & Russian bombers says “Your warplanes cannot bomb our dreams.” The Syrian Arab Spring which dared to challenge Assad’s police state has been vilified as terrorists by propagandists & corrupt & deranged political forces. But the millions of Syrian refugees will force the day when an accounting will be made–we must make every effort to support them–& they will make the truth known. Those who stood with the counterrevolution will face the ignominy & contempt of history & the Syrian Arab Spring will take its rightful place among the most important freedom struggles in human history.

(Photo via National Coalition Of Syrian Revolution and Opposition Forces)