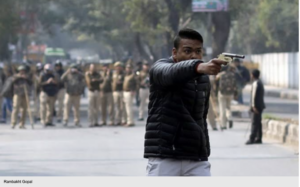 In defense of Rambhakt Gopal–the Hindutva gunman who shot a Kashmiri student in New Delhi during a protest to oppose CAA/NCR–many are saying he was just 17-years-old & should be held accountable as a minor, not an adult. There are reliable reports that he is actually 19-years-old & an active member of a Hindutva organization. If he is in fact a minor, he should be legally prosecuted as such.

Good that this minor question comes up for this Hindutva lowlife terrorist because Kashmiris are responding with vigorous outrage that Gopal’s youth is used to mitigate justice when thousands of Kashmiri kids, some as young as eight, have been arrested in home invasions, tortured & sodomized, jailed under the PSA, or sent to hellhole jails in India, apparently not separated from the adult criminal population of rapists, murderers, nationalist dirt-balls. Occupation & colonialism do not justify the violent treatment of Kashmiri kids but condemn the occupation in even stronger human rights terms.

Demand the immediate, unconditional withdrawal of all Indian troops from Kashmir.