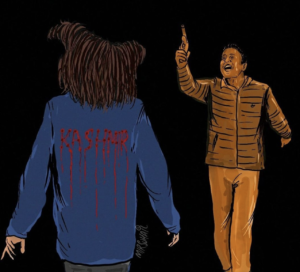 Mir Suhail Qadiri’s representation of Kashmiri student Shadab Farooq challenging gun-wielding Hindutva terrorist Rambhakt Gopal at Jamia Millia Islamia, a university in New Delhi. Meanwhile, the police stood in the background with their arms crossed just watching. Reportedly, after Farooq was shot, the police refused to open the barricades so he could be taken to hospital & he had to climb across the barricades whilst bleeding with a bullet wound.