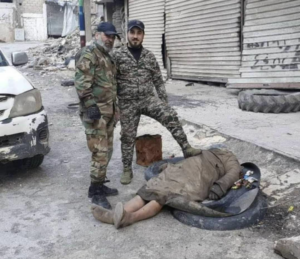 Syrian regime ground forces took over the city of Maarat al-Numan in Idlib on Tuesday night forcing most of the civilians who had survived Syrian & Russian bombing to flee for their lives. A 75-year-old man named Ahmed Jaffal, who survived by junk collecting, refused the pleas of his family & neighbors to leave his home & city believing that as an old man regime forces would not mistake him as a ‘terrorist’.

On Wednesday morning, when Syrian forces found him in his house, they executed him & posed for this photo before pouring petrol on him & torching his body. We have no documentation that he was in fact torched (even though they placed his body on tires). We have no certain proof that he was executed by Syrian forces–only the testimony of a journalist & unidentified Syrians. But posing in this triumphal manner with a foot resting on a dead body is desecration of a corpse & is a war crime under the Geneva Accords. It is completely irrelevant if he was a terrorist or a civilian. Desecrating any corpse is a war crime just as it was for the US to allow the desecration & sodomizing of Libya’s Muammar Gaddafi. This monstrous act exposes the political character of the Syrian regime & its army even though Assad propagandists & apologists will try to lie their way around it.

This desecration & disrespect for Syrian civilians is supported by the Assadist & Stalinist cult which has usurped the antiwar movement & is now attempting to whitewash the crimes of the Iranian regime under the guise of anti-imperialism. Apologetics & whitewashing of war crimes make one complicit & politically corrupt beyond redemption.