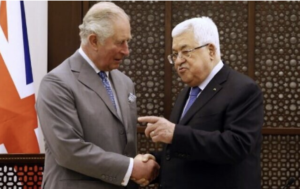 Since the British were instrumental in handing Palestine over to Zionist terrorist militias, Charles Windsor’s expressions of ‘heartbroken’ pity for Palestinian suffering, especially after hobnobbing in Jerusalem with Netanyahu, are like the sound of fingernails on a chalkboard. At a time of genocide, pity is not what solidarity requires.

Windsor met with Mahmoud Abbas, collaborator with Israel & India, who said he was grateful to the UK for accepting the two-state solution & rejecting the US-brokered ‘deal of the century’. Actually, the two-state solution is almost universally recognized as a pipe dream & scam & the UK has not taken an official position on the ‘deal of the century’.

Photo is Windsor meeting Mahmoud Abbas during a visit to Bethlehem on January 24, 2020.