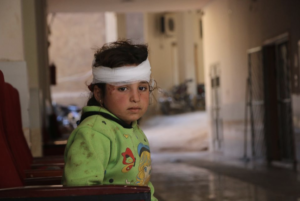 In an unprecedented escalation, Syrian & Russian war planes are carpet bombing the rural areas of Aleppo, including with barrel bombs. Witnesses report nearly 100 airstrikes per day. Children, women, entire families are being buried in the rubble of their homes. Over 67,000 civilians have fled the area in just the past nine days.

At this point, the debate over Assad’s use of chemical weapons is a distraction best left to scientific & forensic experts. Politically, it is as monstrous to drop regular bombs & barrel bombs on unarmed civilians as it is to use sarin gas.

Stand with the people of Aleppo & demand the immediate cessation of bombing & the immediate, unconditional withdrawal of all foreign military forces & mercenaries from Syria.

(Photo of child victim of bombing in Aleppo from White Helmets, January 22, 2020)