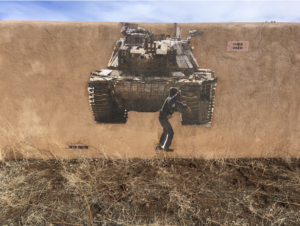 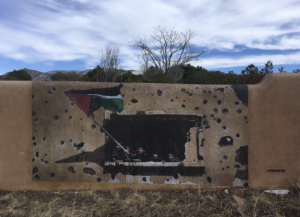 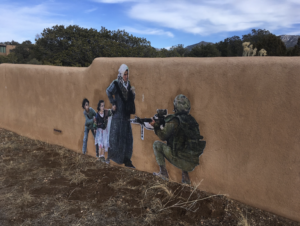 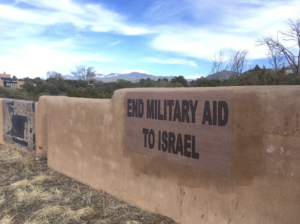 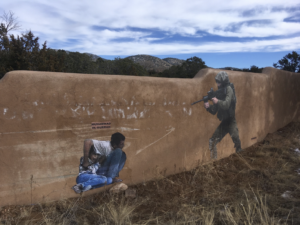 The city of Santa Fe, NM has ordered the owner of an adobe wall in the historic preservation district of the city to remove a series of pro-Palestinian murals created by Navajo artist Remy on January 4th. The reason city officials give is that the artist did the murals in digital images pasted on the wall in papier-mâché when city codes require they “must be built of brick, adobe, rock, masonry, wood, coyote fencing, wrought iron, slump block, or similar materials….These provisions do not provide for the application of artwork on paper with starch-paste glue”. The city officials didn’t explain how one creates murals on walls in brick, rock or any of the other specified materials without defying the laws of gravity.

The organization Santa Feans for Justice in Palestine (which includes Jewish activists) has previously used the walls for posters as far back as the 2014 Israeli bombing siege of Gaza. Most of those posters were vandalized or torn down. The local Jewish community is reportedly divided about the murals, with Zionists, led by Rabbi Berel Levertov, claiming they are anti-Semitic. The rabbi wants the genocide of Palestinians whitewashed into scenes depicting Israelis & Palestinians living in peace–a depiction which would necessarily omit those Israeli snipers at the Gaza border shooting down unarmed protesters. According to him, the intention of the murals is “not to promote peace, but to instigate & inspire hate” against Jews. He called the comparison with Native American struggles in the US “unfortunate propaganda” & “just not factually correct, because Jews are Indigenous to the land.”

Another Zionist resident of Santa Fee who claimed the murals played into “age-old dangerous & false anti-Jewish tropes” said “What we fear is that after the murals come the swastikas.” Speaking of age-old tropes, that’s called guilt-baiting, using the Jewish holocaust to justify genocide against Palestinians. What Palestinians fear is that after the snipers come the bombers. In response to the charges of anti-semitism, Remy simply said: “It’s not anti-Semitic to be sympathetic to a humanitarian crisis.”

There was an initial report that the homeowner would be appealing the order to destroy the murals but that doesn’t appear to be the case. He has only a couple days left before they must be removed. He held a meeting with Rabbi Levertov who suggested a presentation with a ‘more balanced’ view of the Israeli genocide of Palestinians. That would require Israeli war planes bombing the adobe wall to smithereens. Santa Fe media reports Zionist objection to the murals as protestation against eyesores, politically inflammatory images, hate-mongering. Some have already been partially ruined by vandalism. Let’s call it what it is: cooperation of American Zionists with Israel to cover up its crimes against Palestinians.