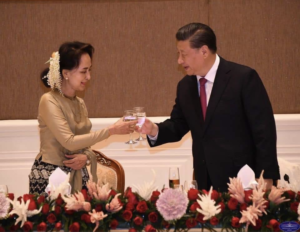 Chinese president Xi Jinping paid a two-day state visit to Burma last week. Burma’s genocidaires fell all over themselves making him feel like an emperor rather than the head of a communist party. That’s because he didn’t come empty-handed. Chinese media reported that the two genocidal regimes signed a multi-billion dollar ‘infrastructure cooperation’ agreement of which US$1.3 billion will be spent on further development of the Kyaukpyu Special Economic Zone industrial park & deep-water port project in Arakan/Rakhine state, the home of nearly two-million Rohingya forced to flee for their lives from the Burmese military.

The Kyaukpyu Special Economic Zone, which began in 2013, was initially a joint venture project between China & the Burmese military which controls the Burmese economy. Since Burma’s transition to neoliberal policies & foreign investment, the project has transitioned to private developers, including Indian corporations. It includes an industrial park (which will likely include sweatshops), the deep-water port, an oil & gas terminal & two pipelines for natural gas & oil which will connect Burma to India & China. The route of the project involves conflict with the Chin & Rohingya peoples & plays no small part in the persecution of the Chin & the Rohingya genocide.

Whilst Xi & Suu Kyi are here toasting the project, they also share the title of genocidaires. Since China diplomatically & militarily supported Burma in its genocide against the Rohingya & were mutually involved in the expropriation of Rohingya land for the project, it is necessary to indict China for the Rohingya as well as the Uyghur genocide in China. It is not possible to deny China’s role since the regime was entirely public in its support for Burma, including at the UN. That explains why Assadists & Stalinists deny the Rohingya genocide as they do the Uyghur genocide.