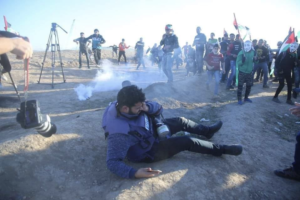 Another Palestinian photojournalist in a press vest was shot in the eye by Israeli snipers while covering protests at the Gaza border. Atiya Darwish, shown here after being shot, was told by doctors that he has lost the vision in his left eye.

Disabling Palestinians is a central feature of Israel’s genocidal strategy. Israeli snipers shooting out eyes or shooting off legs is not going to stop Palestinian resistance to occupation & colonialism. But it does make life much harder for thousands of young people. India uses the same strategy with its use of pellet guns. Exposing the intentional disabling of young people as a strategy of genocide is another way we can yoke & thereby strengthen both the struggles of Palestinians & of Kashmiris.

(Photo from Documenting Oppression Against Muslims)