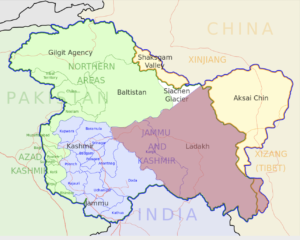 When Chinese Ambassador to Pakistan Yao Jing said China will continue to support Pakistan on Kashmir, it is not the same as saying China will support Kashmiri self-determination. It’s an assertion of China’s right to control the Ladakh region of Jammu & Kashmir which has been at dispute between China, Pakistan, & India since 1947.

As the map shows, Ladakh belonging to Kashmiris, East Turkistan (Xinjiang) home to the Uyghur, & Chinese-occupied Tibet have contiguous borders. China considers Ladakh as part of Aksai Chin. As China sees it, the region has economic, social, military, & political importance. Thus human rights & national sovereignty are of no consequence.

It would be invaluable for Kashmiris to give us some insight into the relationship of Ladakh to the struggle for Kashmiri self-determination.