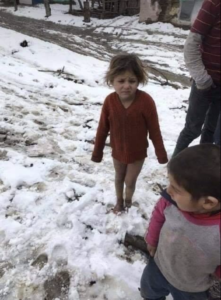 “When my eyes fell on this picture, I felt that the fire of Hell would burn us all without exception.” –Fareed Al

A forcibly displaced child from Idlib who Assadists & Stalinists call a terrorist: they have not uttered one word of protest against Syrian & Russian bombing of civilians or against Iranian, Hezbollah, Russian, Syrian ground forces displacing over 320,000 civilians in the past few months. Some say it’s because only US wars should concern us; others say outright that they support this slaughter to defend the Assad dictatorship’s right to self-determination. How did the international antiwar movement that stood by the millions on every continent against the US war in Vietnam become an Assadist cult that doesn’t even organize protests against US military intervention in Syria, Yemen, Afghanistan, Iraq, Somalia, Palestine, & enthusiastically supports Russian, Iranian, Hezbollah intervention?