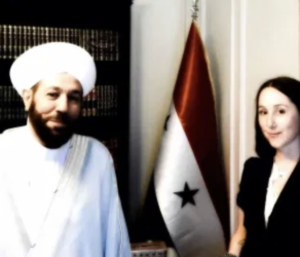 Some may think it too extreme to characterize the politics of Assad & Russia propagandist Eva Bartlett as fascist even though she makes no secret of her associations with Russian & European fascists, including writing obituaries for them when they croak. She has had a long association with anti-Semite David Icke, including as an editor for one of his publications. She mocks the children being bombed by Syria & Russia as ‘crisis actors’, denies the Uyghur & Rohingya genocides, & vilifies the Hong Kong protesters. Bartlett has never declared herself a leftist of any kind but her most ardent supporters believe they are revolutionists. That’s how deranged left politics are these days.

What do Bartlett’s ‘revolutionary’ supporters think of her support for Putin’s coup throwing out the entire Russian government so he can rule like Caesar or Stalin? Or Assad. How do they explain that she affirmatively posted this comment by British rightwing journalist Marcus Papadopoulos?: “Russia needs a strong leader & today’s developments indicate that Vladimir Putin will remain in overall charge of the country after 2024, which is to rejoice over. It should also be said that Russia must develop a strong system & an all-powerful party, as the CPSU was.” Papadopoulos wants Putin to be just like Stalin & Bartlett thinks that’s a good thing.

Marcus Papadopoulos is the editor of the extreme rightwing journal Politics First & is, like Bartlett, a Russia propagandist & frequent contributor to Russian media. He is an Assadist, a supporter of the Chinese regime against the Hong Kong protesters, a denier of the Bosniak (Muslim) massacre at Srebrenica in 2016, recently lauding the genocidaires for their fight against Wahhabism. Current articles in Politics First include “How the Conservatives will take Britain forward” by Boris Johnson & “As we leave the European Union, let us look to Israel for a pioneering trade deal” by Bob Blackman, a Conservative MP & Vice-Chair of the All-Party Britain-Israel Parliamentary Group. Since Bartlett derives some authority from (ostensibly) supporting Palestinians, would her ‘revolutionary’ supporters explain why she promotes a man publishing a call to defy BDS & why she frequently cites him as an authority on politics?

One could argue that Bartlett is not a fascist but only extreme rightwing. The distinction at a time of genocide shades into folly & apologetics.

(Photo is Bartlett with Grand Mufti Hassoun, the guy who signs off on all those hung to death in Assad’s gulag.)