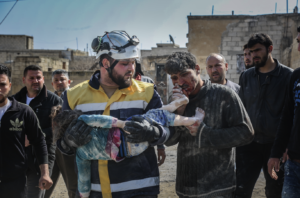 An average of one child per day has been killed over the past year by Syrian & Russian bombing & Iranian, Russian, Syrian, & Hezbollah ground forces in Idlib.

In addition to demanding ‘no US war against Iran’, we should be demanding ‘no Iranian war against the Syrian Arab Spring’. Demand the immediate, unconditional withdrawal of all foreign military forces & mercenaries from Syria.