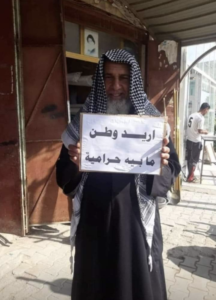 This senior Iraqi named Hasan Hadi Mhalhal protesting against the Iraqi regime & US & Iranian military occupation was assassinated in Nasiryah today. May the movement he was part of play a central role in liberating the Middle East from colonial occupation & war. May he Rest In Peace.

(tweeted by Anas A. Aldabbagh @AnasAAldabbagh)