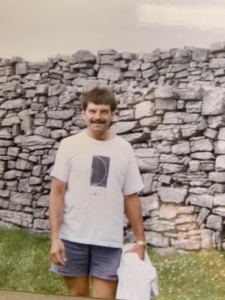 This is the 23rd anniversary of the suicide of my younger brother Paul Francis Scully at the age of 40. His death was one of the most painful losses of my life & I still think about him every day–partly because I did not fully understand the psychic pain he endured as a man stigmatized as ‘retard’. I commemorate his life publicly hoping others will accept, respect, & socially integrate all those with disabilities instead of patronizing, isolating, or persecuting them. This is what I wrote in 2017:

“My brother took his own life by stabbing himself in the stomach after 40 years of being ridiculed & tormented as a person with disability. He was taunted all his life as a “retard” & made to feel small & worthless. He was intelligent, insightful, witty, generous, & so sweet & kind, but being humiliated for being disabled made him hate himself so much he overcame the elemental human instinct for survival. He lived with more psychic pain than most can imagine–or that only the oppressed can imagine–because he didn’t have the sense of self or the social power to defend himself. He knew he was worth something as a human being but he knew he would never get others to understand that.

With great indignation, he would tell me how companions would ply him with alcohol, shave off his mustache which was his pride, & then drop him off on the side of the highway far out of town in the middle of night & the middle of winter. That was his life. That’s the life of many with disabilities & of the oppressed if they don’t have the power to defend themselves.”

May my beloved brother Paul Rest In Peace & may his life & death teach others to reject all stigmas attached to disability.