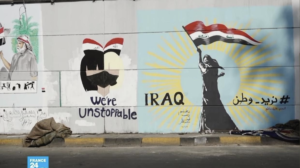 Iraqi protest graffiti: graffiti has played a central role in all of the Arab Spring uprisings, including Egypt, Yemen, Bahrain, Syria, & by Palestinians on the Israeli apartheid wall. Most of it has been destroyed in those countries as part of the counterrevolutions so photographic documentation is invaluable. When these countries have won their freedom from war & occupation, this graffiti will become the monuments of resistance.