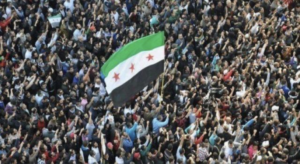 The flag of the Syrian revolution against the Assad regime figured prominently at the Iraqi protests on Friday. The politics of counterrevolution in Syria are not too complex for Iraqis to understand. They are not disoriented or corrupted by Assadist & Stalinist propagandists as so many others, including leading figures of the so-called left. They do not draw their understanding from the collected writings of Stalin, the paid propaganda of Eva Bartlett & Vanessa Beeley, or the embedded ‘journalism’ of Fisk, Pilger, & Cockburn, but from the lived experience of war & occupation. Assadist propagandists be warned.