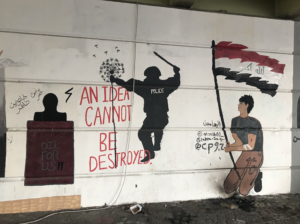 Tens of thousands of Iraqis protested today in Tahrir Square, Baghdad against a corrupt government beholden to foreign powers & against foreign intervention by the US & Iran. They chanted “Screw Iran! Screw America!” & carried placards saying “No to Iran, no to America”. Fearing the resurgent movement would be eclipsed by a US-Iran war, thousands turned out across the country in many cities chanting “go go occupiers”. Thousands streamed into Tahrir Square, the epicenter of the new movement.

The Iraqi movement has to be one of the most important political developments in the Middle East. Since it began in October 2019, nearly 460 people have been killed & over 25,000 have been injured. This movement has the potential to cut like a laser through the monstrous Assadist & Stalinist deceits about the Syrian Arab Spring, the pernicious role of Hezbollah in Syria & against the protests in Lebanon, the role of Iran & the US in Syria & Iraq, & the nearly 20 years of brutalities & war crimes under the US-NATO occupation. There still needs to be an accounting for the criminal & barbarous assault on Mosul & the role of US covert operatives in fostering conflict.

This resurgent movement makes rebuilding a principled antiwar movement more imperative than ever to stand with them in their historic struggle to force US-NATO & Iran to withdraw & let them live in peace as a free people.

The photo is graffiti against foreign intervention in Iraq.