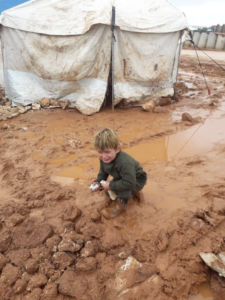 How disturbing that so many once antiwar have now turned Iranian terrorist-in-chief General Suleimani into an icon of liberation in Syria & Iraq. Yet they have never uttered a word of protest in defense of civilians being mercilessly bombed by Syria, Russia, & US-NATO, & besieged by Iranian, Hezbollah, & other terrorist groups. They support Russian, Iranian, & Hezbollah intervention against the Syrian Arab Spring & oppose the ‘US regime-change operation’ but have not educated about nor organized protests against murderous US-NATO military intervention. Their primary campaigning is on behalf of the Assad dictatorship & against what they call ‘Russophobia’.

In seeking to understand how this massive political degeneration happened so fast to so many, we only need examine the ideology of Assadism which is rooted in ‘war on terror’ rhetoric, Islamophobia, & anti-Semitism, along with examining the ideology of Stalinism which promotes tyranny & state power & vilifies all popular democratic movements as orchestrated by the CIA & Mossad. The two political currents formed a malignant alliance in Syria & millions of Syrians, Palestinian refugees, Iraqis have paid/are paying an unbearable price.

(Photo is Syrian child in IDP camp. Photographer & date are not identified)