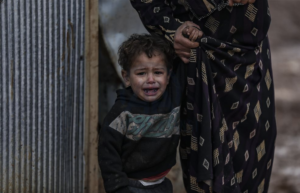 Three million Syrian civilians, mostly women & children, are trapped by Syrian & Russian bombing of Idlib province & the adjacent areas. In the past 8 months, over a million have been displaced, including 320,000 in the past two months. While Assadists & Stalinists support this slaughter as the war against ‘Wahhabi/Salafi terrorism’, they are blubbering & eulogizing the Iranian general who orchestrated much of the actual terrorism against Syrians. We have a political crisis when resistance to tyranny is maligned as terrorism & when erstwhile progressive forces have lost their minds in support of tyranny.

(Photo of child refugee from Idlib via Anadolu Ajansi)