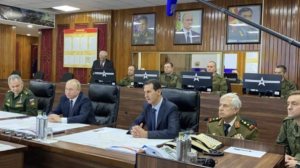 You don’t have to be up on diplomatic protocol to understand that Putin was intentionally humiliating Assad by paying a visit to Damascus & summoning Assad to Russian military headquarters rather than be hosted at Assad’s palace. It’s not the matter of venue but of who is calling the shots politically & militarily. The room is full of Russian military officers except for the guy at Assad’s left elbow who is the Syrian defense minister sitting in a child’s seat.

The diplomatic slights in this are not that interesting but what it signifies is the subordinate position of Assad/Syria to Putin/Russia. Assad mortgaged his regime to Russian oligarchs, the Iranian theocracy, Hezbollah, & US-NATO in order to defeat the Syrian Arab Spring. Chickens will come home to roost for the Assad regime in the so-called reconstruction of Syria. The Syrian people have already paid an immense price for this unholy alliance.