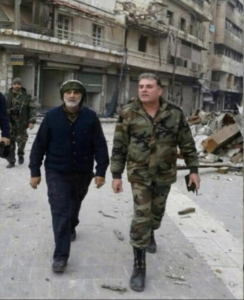 A US drone strike this morning ordered by Trump has assassinated Qassem Suleimani, the second most powerful figure in Iran & commander of Iran’s Quds forces of militias, special forces, & terrorist groups operating in Syria, Iraq, Afghanistan, & Yemen. They function similar to the CIA & US special forces only on behalf of the Iranian theocracy. Assadists & Stalinists are mourning him as a martyr who defeated ISIS in Syria. Iraqis & Syrians subjected to the savagery of his terrorist militias are celebrating in massive protests & rallies. Whatever role he did or did not play in routing ISIS, he more than made up for in terrorism against the Arab Spring uprisings. Routing ISIS is not the touchstone of peace in Syria & Iraq. Forcing all foreign military forces, paramilitaries, & mercenaries to withdraw is what matters.

General Suleimani’s death is no loss to humanity. He was a monster who should have been arrested & prosecuted before an international tribunal to answer for his crimes against the peoples of Syria, Iraq, Yemen, Afghanistan. But regardless of his malignant character, the US had absolutely no right to send drones to assassinate him. It is an act of war against the people of Iran & no Iranian protesters against their corrupt leadership would ever invite the US Pentagon to assassinate him on their behalf.

Instead of calling for international protests against this threat of war against the Iranian people, Assadists & Stalinists are writing weepy-assed eulogies to the general as a martyr who defeated ISIS when he was one of the primary organizers of terrorism in Syria, Iraq, Yemen, Afghanistan with destructive political influence on Hezbollah & some Palestinians. The only worthy response is to stand with the people of Syria, Iraq, Yemen, Afghanistan, Lebanon, & Palestine by demanding the immediate, unconditional withdrawal of all foreign military forces & mercenaries.

This is a photo of Suleimani (on the left) with a Syrian officer strutting around Aleppo in December 2016 after Syrian & Russian bombers combined with Iranian, Russian, & Hezbollah ground forces to crush Syrian Arab Spring resistance in Aleppo. Civilians in Aleppo were being forcibly evacuated to refugee camps in Idlib & elsewhere where they have now faced months of bombing & ground assaults, including by Iranian terrorists. You can call him a martyr if you like but it doesn’t change the fact that he was a war criminal.

No US war against Iran. Demand the immediate withdrawal of all foreign troops & mercenaries from Syria, Iraq, Yemen, Afghanistan.