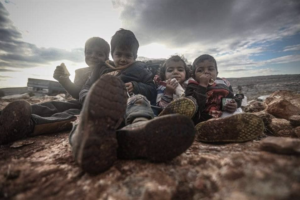 Fascist & Assad propagandist Eva Bartlett welcomed the new year with a litany of old accusations against the White Helmet rescue workers in Syria, including the foolishness about them being al-Qaeda organ traffickers. The only thing she hasn’t accused them of is being extraterrestrial reptiles morphed into Jews trying to take over the world & that’s remarkable since she’s a devoted disciple & once an employee of the appropriately named David Icke whose entire body of lunacy is based on hatred for Jews.

Eva hasn’t got a lot to say these days about Syria since she’s moving on to full-time work as a propagandist for Putin. Using the Palestinians for credentials, she played a role in supporting the Assad dictatorship, denying the Rohingya & Uyghur genocides, vilifying Venezuelan & Hong Kong protesters. She isn’t a Stalinist so much as a fascist (although the distinctions are now entirely muddled) & a rabid hater of Jews & Muslims willing to play ball with any & all reactionary forces in world politics. To what end? To eventually end up a figure of ignominy in the same league as Leni Riefenstahl, Hitler’s sorry-assed propagandist.

Photo is Syrian refugee children fleeing Syrian & Russian bombing of Idlib province & the adjacent regions. According to Bartlett & her demented followers, these children (among 216,932 civilians forced to flee Idlib just in November & December) are terrorists who must be exterminated by bombs.