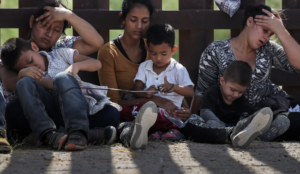 The southern border of Texas along the Mexican border is a subtropical zone, usually hotter than hell. But this winter has been a very cold one. US & Mexican border patrol used to allow refugees & asylum seekers from all over the world to line up in the (albeit) limited shelter of the international bridges. But in the past few months, under Trump’s Remain in Mexico program, they forcibly removed them to camps on the Mexican side where it is just as cold as south Texas since inclement weather does not respect the border wall.

According to some estimates, there are over 50,000 refugees waiting to be processed for asylum along the 2,000 mile border from Texas to California with US immigration officials resorting to cynical & contemptible ploys to discourage & deny them asylum. One Mexican official said Mexican border patrol was trying to get refugees to leave the camps & enter shelters. What shelters would those be since the few shelters that exist in border cities are run by charities & are already packed to the rooftops? Mexico has made no attempt to construct temporary shelters against the bitter cold or in the summer against intolerable heat or to protect refugees from the drug cartels.

The border towns are extremely dangerous since they are controlled by the criminal drug cartels. Transiting Mexico has long been especially dangerous for refugees who along the over 1,000 mile route are robbed, raped, kidnapped, tortured, mutilated, murdered, & dumped in mass graves or on public highways as a warning. Thousands of Americans used to cross the bridges daily for shopping in Mexico but now most of the cities are considered too dangerous. Humanitarian workers in the refugee camps, many who cross from the US despite the dangers, report that the cartels are victimizing women & children in the border camps, including raping, kidnapping, & forcing them into prostitution.

There is no security nor medical care provided by either Mexico or the US & volunteer medical staff (including a Cuban doctor seeking asylum) report treating refugees for epileptic seizures, appendicitis, heart attacks, asthma, & conditions caused by the squalid conditions of the camps like upper-respiratory tract infections, pneumonia, flu, skin conditions such as scabies, & rape.

Immigration is a human right. Asylum for refugees is international law based on human practices going back millennia. Open the damn borders. No human being is alien to us.

(Photo is refugees waiting on one of the international bridges before they were all forcibly removed. From Politicus, 2018)