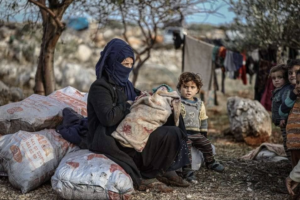 In defense of the Syrian people against this slaughter, there has been only one small antiwar rally reported. The Assadist & Stalinist cult that usurped the international antiwar movement & identifies those Syrians displaced & killed as terrorists is waxing triumphal at the rout of the Syrian Arab Spring & by this have written their own epitaph. May they rot in hell.

Stand with the Syrian Arab Spring: demand the immediate cessation of bombing & the immediate, unconditional withdrawal of all foreign forces & mercenaries from Syria.

(Source of data is Syrian National Coalition’s Media Department. Photo of Syrian refugees from Idlib is from Syrian activist)