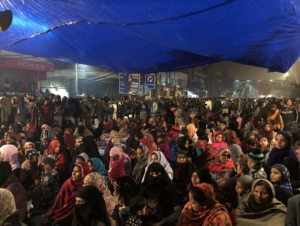 Yesterday, a friend & I went to see “Terminator: Dark Fate”, the new Terminator film where three women, including 63-year-old gray-haired Linda Hamilton, were the main action heroes. So much fun to see a cinematic presentation, even in this lowbrow form, of political reality. Women have always played a leading role in history but the men who write the history simply write us out, just as they do Blacks, Native Americans, & other colonized peoples.

That will be harder to do now that women’s political roles are documented on social media. Muslim women can no longer be portrayed as victims who need to be rescued by US-NATO or Syrian & Russian bombers, mercenaries, & Marines. (How Assadists & Stalinists pulled that off in Syria is a triumph of racist & Islamophobic orientalism & ‘war on terror’ rubbish.) The prominent role of Kashmiri women in the struggle against occupation stands out as do these Muslim women at Shaheen Bagh, Delhi, who have not left the streets in 14 days of protest against the citizenship laws that make their persecution legal.