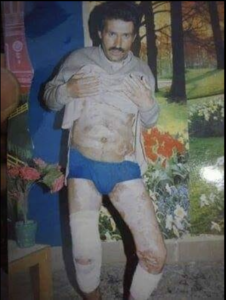 Portrait of Ghulam Mohammad Dar, a Kashmiri torture victim who died in 2015 with a body covered in scarring, including from being burnt alive: whatever the Indian government has planned for Muslims & dissidents in India, it first tested on the bodies of Kashmiris.

“Ghulam Mohammad Dar, a resident of Tral area of Pulwama district. In 1995,He and his colleague were picked by SOG without any reason and shifted to a camp in bijbehara.Over the next few days they were inflicted a severe degree torture and later they were burnt alive.While his colleague died,Ghulam Mohammad Dar suffered heavy burn injuries.He was later found by his family and shifted to hospital.However he was never able to recover fully. From 2013 ,his condition worsned,his bones so weak that a soft hit lead to multiple fractures.His body was badly scarred and he was reluctant to show it,so much that he had left a will that no stranger shall see his body when given “Ghusul”..In july 2015,he could no longer fight and left this world.”

Demand the immediate release of all Kashmiri political prisoners & the immediate, unconditional withdrawal of all Indian forces from Kashmir.