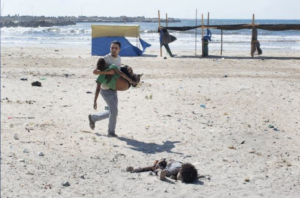 In going back through my archives to cover photos with warning labels, the censors covered this one from a Gaza City beach in July 2014 just after four Palestinian boys were killed by Israeli bombers during the murderous seven-week bombing siege of Gaza that killed 2,300 Palestinians & injured 17,000. The UN reported that Israeli bombers directly targeted children in the siege.

Even though this photo has been shown millions of times on social media the censors not only covered the photo but took away the share button. They can cover the photo again but they cannot hide the reality of Israeli genocide.