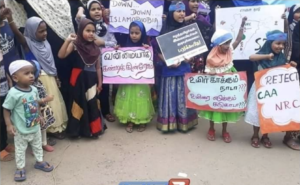 As in Kashmir, so goes India: it has been estimated that since August 5th, nearly 13,000 Kashmiri children have been abducted by Indian soldiers in nighttime home invasions, tortured, transferred to hell hole prisons in India. Now it is reported that in the Indian state of Tamil Nadu Madurai District, police have filed cases against kids who participated in protests with their parents.