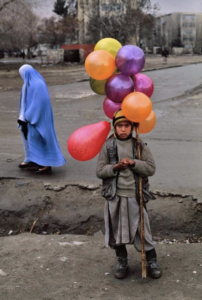 ‘Balloon vendor, Kabul, Afghanistan’ by photographer Steve McCurry in his series on children of war: the US-NATO occupation is entering its 19th year of continuous bombing, war crimes against Afghans, thousands of land mine victims with their limbs blown off, millions seeking & being denied asylum, massive homelessness & widespread child labor. It was the opening shot in the Islamophobic & colonial ‘war on terror’ campaign.

The US has modified its justifications for the occupation from hunting Osama bin Laden to saving Afghan women to fighting the Taliban & now ISIS. There is no news coverage of the war under the rubric that if it isn’t reported, it isn’t happening. But it was always & remains an illegal & amoral war with no possible justification. Since the degeneration of the antiwar movement under the influence of Assadism & Stalinism, there have been no antiwar actions anywhere in the world to stand with Afghans in what is becoming one of the longest wars in US history. One of the most important political responsibilities of our times is to rebuild a principled antiwar movement that makes no compromises with militarism no matter what odious justification is offered.