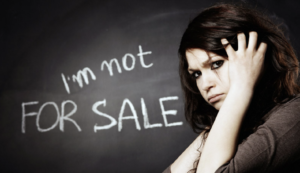 Human trafficking for sex slavery is a burgeoning, multi-billion dollar international industry that preys on the poorest & most marginalized women & children & is now engaged in a global effort to completely decriminalize prostitution. It has received political support from the UN whose officials & so-called ‘peace-keeping’ troops are implicated in thousands of sex crimes & also by Amnesty International, whose campaign for decriminalization was bankrolled by one of the richest pimps in the UK.

Now they are on a campaign to decriminalize prostitution in the US & are using the 2020 presidential campaign to advance it. They have made it an issue in the campaign & have lined up Sanders, Warren, Alexandria Ocasio-Cortez, Ayanna Pressley, Kamala Harris (now dropped out of the campaign), Corey Booker, & others to endorse complete decriminalization. Traffickers & pimps don’t have to directly approach these politicians but do so through front organizations of prostitutes & transgenders & by upper class women who think it progressive to push hooking for declassed, immigrant, & Black women as a way to make a living. They expect their own daughters, of course, to go to Stanford, Harvard, & Yale. They cynically added transgender rights as a way to legitimize prostitution, as if transgenders were obligated to hook to afford surgical transition or as if transgender oppression rendered prostitution legitimate. The contempt for poor & marginalized women is breathtaking in its ignorance & class arrogance. For their promotional campaign the traffickers hire sexed-up women to talk about their right to do what they want with their bodies. These women are not leading the decriminalization campaign & they are certainly not bankrolling it if they don’t have enough money to stop selling sex.

Prostitution is a scourge that can never be consensual sex since it is rooted in patriarchal power relations & economic poverty. It is not a form of labor but the commodification & exploitation of poor women & children’s bodies. The distinction between prostitution & trafficking can no longer be made, not just because there is so little to distinguish the pimp from the trafficker, but because brothels & the streets are filled with trafficked women & children. Forcible trafficking of thousands of women & children is the imperative issue, not legitimizing street walking.

The alternative to decriminalization is the Nordic Model which decriminalizes prostitutes but prosecutes traffickers, pimps, & johns. There are some problems with this model, primarily that once made law, it is not enforced by police or the courts which remain patriarchal institutions. It’s a weakness in the model that must be addressed. But the complete decriminalization of prostitution will exponentially increase trafficking & violence against women & children.

Those who think they’re avant-garde for supporting prostitution as consensual sex or who support decriminalization accept the power relations involved which make prostitutes a major target for rape, assault, & murder. They are profoundly ignorant, insular to reality, or share the traffickers’ contempt for women or may have watched one too many reruns of “Pretty Woman”, which like most Hollywood movies, glorifies this squalid exploitation. There is considerable feminist scholarship on the character of prostitution around the world, including in its relationship to militarism. Those who consider it a legitimate form of labor rather than commodification of women & children need to do some study before they shoot off their mouthes & put women & children in more danger than we already are.

(Photo is from Tennessee campaign against trafficking)