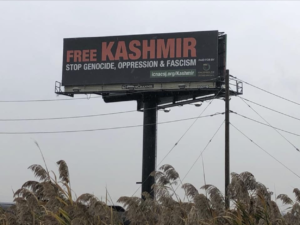 Just a reminder that Kashmiris have been the vanguard of the struggle against Indian fascism & are not opportunistically hopping on the current protests in India for the ride. This billboard on the New Jersey Turnpike was up in early October & remained up for a month right in front of the Newark Airport. It specifically links the occupation to Indian fascism.

It should be said without batting an eyelash that the educational work Kashmiris have done for years around India’s occupation has done more to alert Indians & inform international human rights & antiwar activists about the character of Indian fascism than any other individual or organization in the entire universe. Once you understand that, you can begin to understand the imperative of integrating support for Kashmiri self-determination & opposition to the occupation with the struggle against legalizing persecution of Muslims in India. Kashmiris should be respected as part of the political leadership of the movement against Indian fascism, not regarded as hangers-on to the movement in India.