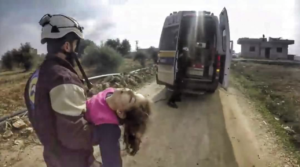 This is a White Helmet rescue worker (who Assadists smear as al-Qaeda organ traffickers) carrying a child (who Assadists call a terrorist) killed by Russian bombers in Idlib.

If, after eight years of carnage & slaughter against the Syrian Arab Spring, you still support the Assad dictatorship & Syrian & Russian bombing of civilians, you have crossed the line to infamy & political depravity even if you believe you are on the right side of justice. There is no excuse at this point for not understanding the Syrian struggle against dictatorship in its holistic connections to the several & ongoing Arab Spring uprisings & to the entire structure of the Islamophobic ‘war on terror’.