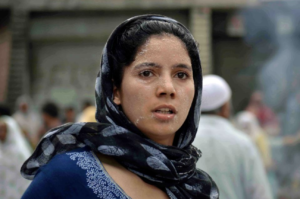 Kashmiris have every reason to worry that the protests in India will preempt political focus on the occupation & lockdown of Kashmir. They worked tirelessly for years on social media to overcome the news blackout that had prevailed for decades only to have the internet shut down. But the two struggles are yoked by India’s thrust toward Hindutva fascism using Kashmiris & Indian Muslims as Nazi Germany used Jews & Roma.

The protests against the Citizenship Act & National Register of Citizens are not a case of ‘chickens coming home to roost’ but a chance for Kashmiri activists to finally drive home the solidarity they’ve been trying to build for 72 years. The fate of Kashmiris (in their majority but not all Muslims) is inextricably linked to the struggle against pogroms, mob violence, & lynchings of Muslims in India. They are also yoked within the broader arena of the Islamophobic ‘war on terror’, tying them to the struggles of the Uyghur, Rohingya, Somalians, Palestinians, Yemenis, Syrians, Iraqis, Afghans, Sri Lankans, & so many others enduring colonial wars & genocide.

What happens in India regarding Kashmir & the anti-Muslim legislation will not stay in India but has far-reaching international repercussions for advancing or thrusting back the tsunami of extreme right governments on every continent.

Kashmiris have long been in the vanguard of international solidarity with the oppressed despite the brutal occupation & attacks on protesters. We cannot, for one moment, turn our attention away from the occupation & lockdown or four months will become permanent. Their struggle remains one of the most important freedom struggles of our times.

This is a Kashmiri woman protester with salt on her face against tear gas. This photo is from late November taken at a protest during the lockdown. International media is no longer reporting from Kashmir most likely because they’re afraid of Indian genocide. The telecommunications blockade is a call to action, not a cause to turn our attention from Kashmir. Through solidarity, the protests in India present an opportunity to broaden the Kashmiri struggle, not weaken it.