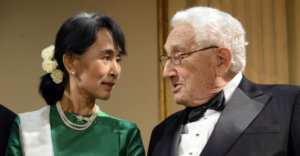 Suu Kyi & Kissinger, two Nobel Peace Prize winners & genocidaires, during her 2012 visit to the US after picking up her belated 1991 Nobel Peace Prize: here they are at the award ceremony of the Atlantic Council’s Global Citizen Award which they both received. Just like Modi was picking up all sorts of human rights awards after he launched the genocide in Kashmir.

Neither of them is likely to face prosecution in their lifetimes. But we can use the ICJ proceedings along with mountains of other documented evidence against the two to make sure history places them appropriately along side Hitler, Goebbels, Stalin, Pinochet, Modi, Trump, Assad, Putin, Karadzic, Netanyahu, Bolsonaro, Bush, Clinton, Obama, & legions of other monsters who made life on earth for billions of human beings a living hell. Meanwhile, while their sorry asses are still alive, we should continue our efforts to expose their crimes, hold them accountable, & bring them to justice.