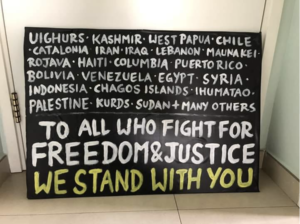 A poster at the December 8th protests in Hong Kong: doesn’t this placard succinctly explain the denunciations & implacable hatred of Assadists & Stalinists for the Hong Kong protesters? The Hong Kong protesters stand with others around the world fighting repressive & autocratic regimes like the Chinese Communist Party regime. They have annually protested to demand justice for those massacred at Tiananmen Square in 1989. There have long been reports of protests within mainland China, especially against environmental ruin, but most of that news has been effectively suppressed as we believe news of the Hong Kong protests are suppressed in mainland China.

Assadists & Stalinists do not have the excuse of lacking information. Their corrupt, elitist, class-based political method covers their rightwing politics with the mantra ‘US regime-change operation’. Of course the US has long been involved in removing or assassinating political leaders. No one would dispute that. It has long been involved in trying to disorient, discredit, & demobilize popular democracy movements. It even learned in the Arab Spring uprisings how to help corrupt regimes take advantage of mass protests to pull off coup de d’états, as in Egypt & Bolivia. But to reduce political analysis of complex conflicts in the barbaric phase of capitalism to US puppetry & all democracy protesters to sock puppets of the US without including analysis of the global crisis of capitalism & contradictions & conflicts within those societies is deeply racist, white supremacist, & makes a mockery of political theory. It should be ridiculed as the politics of simple-minded apologists for tyranny.

Now a group of the same Assadists, Stalinists, fascists, & all their camp followers are making the same claim toward Iran protests. The ‘US regime-change operation’ mantra as an analysis for complex national & international politics should be rejected with disdain. But that inept all-purpose mantra, which has confused so many, forces us to think out how to sort through the cacophony of conflicting reports to come to real understanding of what these international uprisings against barbaric capitalism represent.

Fullest solidarity with the Hong Kong protesters who stand with the oppressed & with working people around the world. My only additions to their list would be the Rohingya, the Black, Native American, & Latino communities in the US & Indigenous peoples on every continent now subject to expropriation, marginalization, plunder in the name of economic development.

This photo was tweeted by @hkwuliff who lives in Hong Kong & reports often on the protests, the repression, & the persecution of Uyghur Muslims)