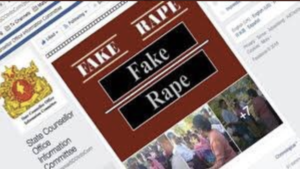 Aung San Suu Kyi is masterful at talking out of both sides of her mouth. While basking in glory as an international human rights icon prior to her election as president, she made a videotaped presentation on the Burmese Army’s use of mass rape as a weapon against the oppressed nationalities. Burma is a prison house of nations, including the Karen & Shan along with the Rohingya. Karen women activists & organizations, many of them in forced exile after the 1988 popular national uprising, have done remarkable work educating about the violence inflicted on Karen, Shan, & Rohingya women by the Burmese military. During the 2017 phase of the Rohingya genocide, Karen women came out full force in solidarity with Rohingya women facing mass rape.

After her long collaboration with the generals became fully evident during the 2017 siege against the Rohingya, Suu Kyi reversed her inconvenient views about the Burmese Army. When reports of extreme sexual violence & mass rapes of Rohingya women were emerging in international media, she posted this image on her Facebook page. It was at the same time she was denouncing all photos from the genocide in Arakan/Rakhine state as ‘fake news’. One journalist reports that diplomats disturbed by this image questioned her about it but their objections were arrogantly rebuffed. However, it wasn’t long before this image was removed from her wall. But not before there were screenshots & significant outrage, including from Karen women. Since the 2017 siege, Suu Kyi has repeatedly defended the military against these charges & will be forced to do so at the genocide case in The Hague since this image was presented by Gambian lawyers prosecuting the suit against Suu Kyi & the generals at The Hague.