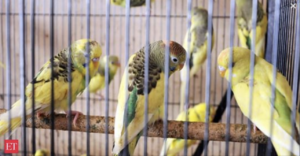 No one who loves birds could disagree with the Delhi High Court ruling in 2015 that birds have a fundamental right to ‘live with dignity’ & fly in the sky without being kept in cages. Birds who are a symbol of freedom lose their purpose for living & develop despondency & many other psychological & emotional problems from being caged. It was so avant-garde & humane for the Indian court to make that ruling for the welfare of birds.

But recognizing the indisputable & fundamental rights of birds strikes a strident chord when juxtaposed to the occupation & complete lockdown of Kashmiris. Don’t human beings also have indisputable & fundamental rights to dignity & freedom? Not according to the Supreme Court of India. According to the observation of Burhan Qureshi, “Kashmir is not a bird, obviously.”

(Photo is despondent parakeets in an all too common posture for caged birds. We don’t have current photos of suffering Kashmiris because of the occupation & telecommunication lockdown now in its fourth month.)