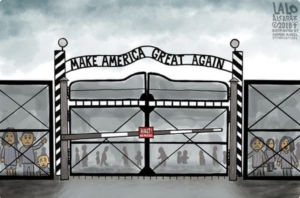 Impeachment signifies nothing when Trump should be prosecuted & incarcerated for crimes against humanity for his treatment of refugees, including the torture, trafficking, & deaths of small children. This quote & political cartoon of US child concentration camps for refugees was tweeted by Syrian activists in response to Trump’s protest against impeachment proceedings.:

“The best political weapon is the weapon of terror. Cruelty commands respect. Men may hate us. But, we don’t ask for their love; only for their fear.”

–Heinrich Himmler, a leading member of the German Nazi Party & a main architect of the Holocaust