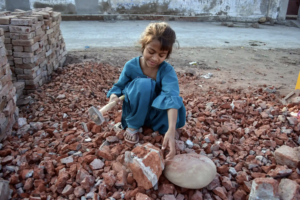 This photo of a child construction worker in the Patiala district, Rajpura, India by Kashmiri Saqib Majeed was a Guardian photo of the day on November 25th, 2019. Under sweatshop economics, child labor is ubiquitous across the globe, including in the US where small children work legally as immigrant farmworkers & were denied protective legislation under the Obama regime against working with livestock, chemicals, dangerous tools, or in grain silos which shift & can bury them. Because human trafficking is involved, estimates vary worldwide from 150 million child workers to 217 million under the age of 14. In India, it is estimated there are 35 million child workers. Their lives are directly affected by Indian militarism which wolfs down money better spent on building schools.

Child labor is integral to neoliberal economics, primarily as a form of cheap, exploitable labor & to undercut labor organizing by adult workers. It might be pointed out that while many are pointing to Bolivia as a worker’s paradise, child labor, including as underground miners, was massive enough that attempts were made to legalize it & to portray the legalization of child labor as progressive. Children belong in schools & playgrounds, not in mines, construction sites, or sweatshops.