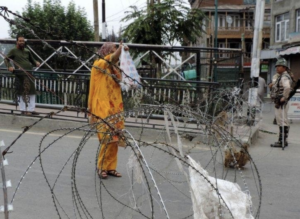 Report from the 120th day of Kashmir caged: Kashmir Media Service (KMS) reports that during the on-going four-month siege & lockdown, 38 Kashmiri have been killed, including two women & three young boys; 853, mostly protesters, have been injured critically by pellet guns, teargas shells, live ammo; occupying troops molested, abused, or humiliated at least 39 women after home invasions to kidnap & arrest children. KMS reports that at least 11,401 leaders, activists, & other have been arrested & remain in jail although human rights lawyer Parvez Imroz estimates the figure as closer to 20,000 & even as high as 30,000. Friday prayers at Jamia Masjid in Srinagar have been shut down since August 5th although the gates were often locked by the Indian Army many times long before that.

Telecommunications remain shut down, most shops, offices, & business enterprises are closed, partially by a resistance boycott, & the schools remain empty of students & teachers. The suffering of Kashmiris under such conditions is incalculable, especially the trauma sustained by children locked down like in an open air prison.

The occupying army has made so many restrictions on international journalists that little photojournalism has recorded these conditions & is not available, even in major media. This photo by Kashmiri photojournalist Junaid Bhat is from this current lockdown but it could just as well have been taken in 2016 or even earlier. Such is the barbaric character of the occupation.