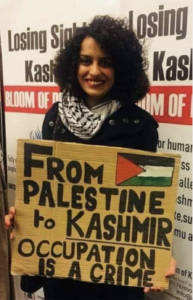 From Palestine to Kashmir occupation is a crime. The affinities between the two struggles for self-determination are so profound that uniting them in action will educate about both struggles. It will not weaken either but significantly strengthen both, as this young activist says.

Kashmiris have long supported Palestinians but every once in a while someone would ask ‘why don’t Palestinians express support for Kashmiris?’ Until Kashmiri activists on social media overcame the decades-long news blackout, not many people knew about their struggle, including Palestinians. Because of the power outages in Gaza caused by Israeli bombing, not many Palestinians have access to the internet. By uniting these struggles in action, as this young woman did, more people around the world will come to understand the Israeli & Indian occupations & why they must be opposed.

The photo is from one of the many #StandWithKashmir protests of the past four months but the city, date, & photographer are not identified.