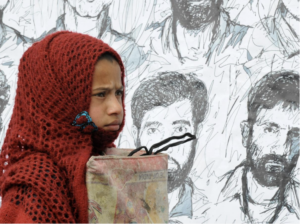 When we speak of internationalization of the Kashmir conflict, we do not mean government officials issuing wimpy-assed statements about ‘India & Pakistan resolving their long-standing territorial dispute over Kashmir’ & then carrying on business as usual with India. A few weeks ago & nearly three months after India’s fascistic siege in Kashmir had begun, Germany’s Angela Merkel made a three-day state visit to Modi where they signed agreements to fight terrorism in all its “forms & manifestations” as well as for cooperation in space research, agriculture, marine science, education & academic research, sports, cultural exchanges. She couldn’t do that in the middle of the siege without an obligatory statement about Kashmir so she said, “The situation now for the people (in Kashmir) is not good & not sustainable. This has to be improved for sure.” That’s really putting it to India on their genocide in Kashmir. But those trade deals talk louder than her ‘not good for sure’ thing.

Now the king & queen of Sweden are on a six-day state visit to India to nail down a multi-billion dollar trade deal, a defense deal for the the sale of 114 Swedish fighter jets to India, & several other deals for political, business, scientific & academic cooperation. To mitigate any censure of this venality, Sweden’s ambassador to India Klas Molin said, “The Kashmir issue is a long-standing one. We see it as emanating from a bilateral dispute & thus has to be resolved through dialogue between India & Pakistan. That is the EU’s position. The other main tenet is that Kashmiris should have a say in their own future.” Better than ‘not good for sure’ or just a more cynical version of it? When Putin met with Modi just one month into the siege of Kashmir to finalize a one-billion US dollar line of credit from India to Russia ‘for development of Russian’s Far East region’ (to bankroll the annexation of Crimea), Putin boasted of Russia’s support for India’s siege & of supplying the most modern weapon systems to India to suppress Kashmiris. Venal & cynical, yes. But not duplicitous & smarmy like Germany & Sweden.

Kashmir is not a territorial dispute between India & Pakistan as Imran Khan as made eminently clear. It is an issue of Kashmiri freedom from Indian colonialism & occupation. This little Kashmiri girl is walking past a poster at a protest for those forcibly disappeared by India. The photo is from 2014 because protests in Kashmir are now banned. Keep this image in mind when you consider the ‘internationalization’ of Kashmiri freedom. The statements by governments, including the EU, are pathetic since they take no action, make no commitments, nor sanction India to defend the people of Kashmir.